Don’t Compromise Your Soul for Unity 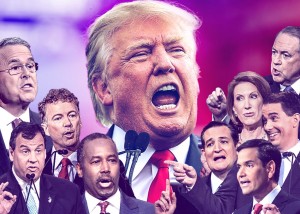 Don’t Compromise Your Soul for Unity

It is now obvious to all with ears to hear and eyes to see that Donald Trump can do no wrong in the Republican Party. It is disheartening to see major influential leaders of the Republican Party such as RNC Chairman Reince Preibus and Speaker Paul Ryan continue to make excuses for Trump’s continued racist, misogynistic, xenophobic, sexist, and Islamaphobic remarks.

Someone taught them that these actions were right. That they were justified in feeling the way that they did about women, immigrants, Muslims, minorities, the disabled, etc. They were brought up to believe that anyone who challenged their beliefs or way of life was the enemy and that they had to dig in their heels and not back down. Any attempts to challenge them were tagged as “the liberal agenda” or worse “Christian persecution”.

This brings back to mind the film American History X and a specific scene where the father is telling the son to watch out for his teacher and anyone else who attempts to bring equality into the system because “It’s an agenda.” The father plants the seeds of skepticism and hatred of equality, fairness, and anything that is different from their way of life. It’s a gut wrenching scene, but it makes an important point of where these thoughts arise.

“Make America Great Again” is coded language and is meant to appeal to these people which are the base of the Conservative party. Many say that they are surprised, but I and many other minorities and people groups have known that this was their true face all along. We recognized this ever since the 1930’s when FDR instituted the New Deal and both parties switched platforms. It became even more pronounced when the Dixiecrats in 1948 became part of the Republican Party in opposition to the Civil Rights Movement. It was made clear when Lee Atwater talked about the Southern Strategy and instituted Dog Whistle politics into the system.

All of this has culminated in the man Donald Trump and the Dog Whistles have now been replaced by loud speakers and a TV screen for everyone to hear and see. They think that we are ignorant, blind, and deaf. We know the game and even some in the Republican Party can see.

It’s disappointing that any Republican would continue to support Trump after all that he has said against various minority groups, women, vets, Muslims, the disabled, etc. We can disagree about a variety of things, but what should not be a matter of debate is when someone disparages, degrades, and dehumanizes anyone made in God’s image.

When your candidate is being supported by Neo-Nazis, David Duke, the KKK, Putin, and Kim Jong-Un then there has to be a point where you start to say enough. When you see someone being kicked around and mistreated by a high school bully and his posse you don’t join in because you’re afraid you might be next or might be ostracized. You stand up for the victim and protect them despite the consequences.

These people claim to follow Christ and His teachings. Well, this is what Christ taught.

Do you really want to be found guilty of disparaging, dehumanizing, degrading, and threatening the immigrant Jesus, the Muslim Jesus, the African-American Jesus, the Latino Jesus, the woman Jesus, the disabled Jesus, and the veteran Jesus?

For what does it profit a man to gain the whole world and forfeit his soul?

If you are trying to justify any of Trump’s remarks about other flesh and blood human beings, that have been made in God’s image mind you, then you have lost your humanity and your very soul.

Turn back and repent. Stand up and fight for those who are marginalized and oppressed. Stand up to the Trump’s of the world and say, “No more!”

Christ taught us how to be the salt of the earth and lights in a darkened world. That is precisely what we must strive to be as His followers.

I leave you with this.

Speak up for those who cannot speak for themselves, for the rights of all who are destitute.

Speak up and judge fairly; defend the rights of the poor and needy.

Live in harmony with one another. Do not be haughty, but associate with the lowly. Never be wise in your own sight.

Repay no one evil for evil, but give thought to do what is honorable in the sight of all.

If possible, so far as it depends on you, live peaceably with all.

By Darrian B., blogger, speaker, and dedicated follower of The Way of Christ.

truth. I started writing in my last years of high school at Classen School of Advanced Studies. I currently write for Oklahoma Baptist University's newspaper The Bison as Assistant Editor and Contributor. I have an intense passion for research and digging deep for the truth. I believe that people deserve to know the truth even when it is controversial. I love people and being able to tell their stories as accurately as possible. I love fighting for the oppressed and marginalized and believe that the written word has the power to be one of the most effective ways of achieving that goal. Writing shapes and influences the way we think and feel about issues and I believe that I can be a positive contributor to this organization by passionately defending the truth and helping to open the minds of your readers to new possibilities.