Criminalizing the Homeless: War on the Poor part 2 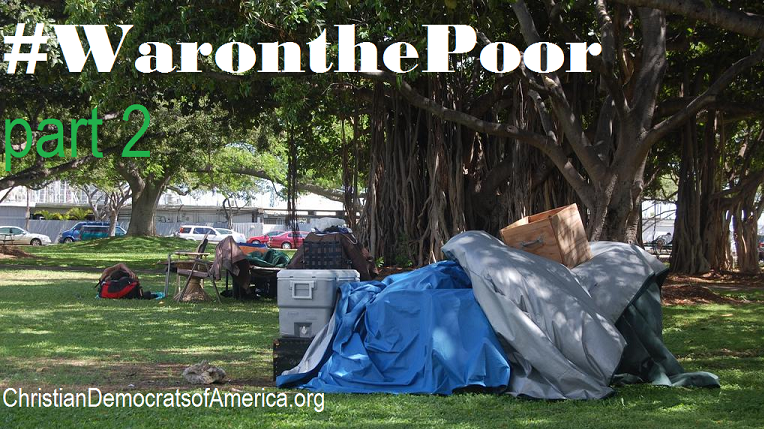 Cities and parks across the country setting up ordinances that essentially criminalize poverty and those trying to help them.

Another feature of the War on the Poor series – a great article from Sojourners highlighting the criminalization of the homeless and the hungry. Psalm 72 below speaks of why the King of a nation will be blessed…and there are so many other scriptures, a dominant theme in the Bible from Genesis to Revelation, about why we are blessed, what God’s people are called to do, and why a nation will be doomed or blessed. This is why we need to be praying for America daily…not because gay people are getting married.

1 Endow the king with your justice, O God,
the royal son with your righteousness.
2 May he judge your people in righteousness,
your afflicted ones with justice.

3 May the mountains bring prosperity to the people,
the hills the fruit of righteousness.
4 May he defend the afflicted among the people
and save the children of the needy;
may he crush the oppressor.

….12 For he will deliver the needy who cry out,
the afflicted who have no one to help.
13 He will take pity on the weak and the needy
and save the needy from death.
14 He will rescue them from oppression and violence,
for precious is their blood in his sight.

…17 May his name endure forever;  may it continue as long as the sun.

Then all nations will be blessed through him,
and they will call him blessed.

There is no longer a war on hunger in this country.

There is no longer a war on poverty.

There is a war on the hungry.

There is a war on the poor.

It is being waged all over the country with the most recent — and visible — battle coming from Raleigh, N.C., and the now-viral incident with the Rev. Hugh Hollowell’s Love Wins ministries.

Conservatives love to tell folks that the best way to end poverty, homelessness, and need in our country is through the work and generosity of private individuals and private donations, not through government programs.

The answer, they say, is charity.

Yet in a stroke of cruel hypocrisy, when charities actually address these issues in real life, they aren’t commended for their work.

Rather, they are threatened with arrest.

That’s exactly what happened to Hollowell and others with Love Wins. But, Hollowell’s experience is far from an aberrant or isolated incident in this country, and it is critically important we recognize that. In fact, this is one of the dangers of the (appropriate and encouraging) outpouring of support for Love Wins: that we will see this one injustice in isolation rather than in its broader context.

Right now, there is a critical opportunity to pivot the conversation and show how this one incident is symptomatic of a much larger issue. See, across the country, cities and lawmakers are targeting people who are homeless (and those who help them) for arrest and for removal. And they have been for years, as the experiences of Food Not Bombs demonstrates, as well as this comprehensive report from the National Coalition for the Homeless about food-sharing restrictions.

The list of cities targeting the homeless is long, and it’s not just a symptom of conservativism or of the Deep South. This targeting crosses all political lines. The list of 10 Meanest Cities toward the homeless includes conservative bulwarks like Atlanta as well as liberal ones like Berkeley and San Francisco. Their list of ordinances and tactics targeting and criminalizing homelessness is long, creative, and diabolical.