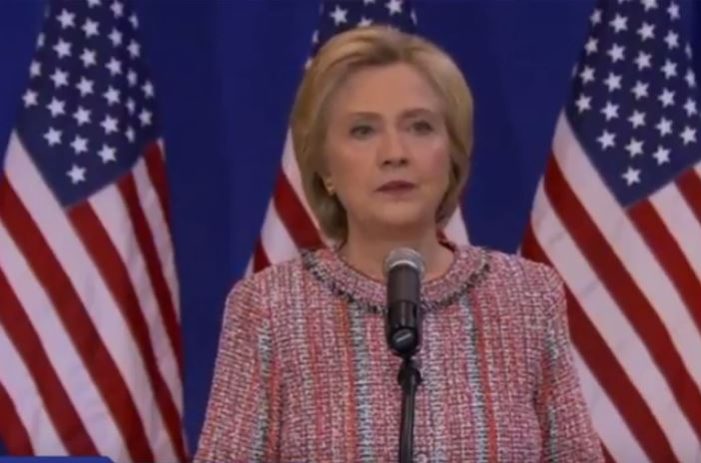 Hillary defended Flint pastor attacked by Trump today, saying, “Reverend Faith Green Timmons is not a nervous mess; she is a rock for her community in trying times. She deserves better than that. And Flint deserves better. In fact, so does America.”

The Religious Right just lost another argument on why they are supporting Trump – that he will defend Christians. Today, in one of his most pathetic attacks yet, Trump actually took aim at a beloved pastor in Flint, Michigan after she kindly asked him to not use her church as a political attack pulpit against Hillary Clinton. Trump called Pastor Faith Green Timmons a “nervous mess” saying she was “shaking all over.” He also accused her of “playing games.” In the same statement he said the people there  at the church seemed to love him, blaming her for the entire incident. But is it true that the people really were responsive at the church? No, in fact the crowd was heckling Mr. Trump during his speech when Pastor Timmons actually asked them to stop and to show him respect. See the video below.

So this is how Trump speaks about pastors, religious leaders fighting for their communities, supporting good works in times of crisis? And it is how he treats people who defend him, asking her congregation to respect him? Hillary Clinton had it right in her statement today: “His latest target is a pastor in Flint, Michigan who respectfully asked him not to use her pulpit for political attacks. He called her a nervous mess. That’s not only insulting. It’s dead wrong. Reverend Faith Green Timmons is not a nervous mess; she is a rock for her community in trying times. She deserves better than that. And Flint deserves better. In fact, so does America.”

One of the arguments we have heard from some Evangelicals is that Trump cares about defending Christians. Well it appears that case has been lost today. Thank you Hillary Clinton, for standing up for Pastor Timmons, the people of Flint, for standing up for decency, respect and Christians doing good works everywhere! As Hillary said at the National Baptist Convention September 8th, “As pastors, you know better than anyone the importance of building relationships of trust and respect.  And I’m sure you’re sick and tired of politicians who think they can just show up at election time, say a few nice words, and earn your support.  You and your congregations deserve better than that.  You deserve a sustained commitment to expanding opportunity, equity, and justice – not just every two or four years, not just when the cameras are on and people are watching, but every single day. ”