Michigan’s Republican governor is planning to sign into law anti-union legislation this week, so President Obama’s visit is perfect timing. Also thankful the President is standing firm on tax breaks for the wealthy. 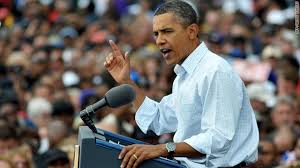 Redford, Michigan (CNN) – President Obama’s latest PR blitz pushing his position in the fiscal cliff showdown brought him to a Detroit-area motor plant Monday, where he pledged to a union-heavy crowd that he would not compromise on raising tax rates for high-income earners.

“I am not going to have a situation where the wealthiest among us, including folks like me, get to keep all our tax breaks,” Obama said, adding, “when they start making a million, or 10 million, or 20 million, you can afford to pay a littler more. They are not too strapped.”

The 20-minute speech before a group of invite-only attendees appearing to number a few thousand was the most recent in a string of appearances by the president before key constituencies seeking to bolster support for his stance on raising tax rates for high wage earners in the new year.

But the Detroit area appearance – Obama’s first trip to Michigan in more than eight months- carried separate significance for union supporters here who are facing the likelihood that Michigan’s Republican governor will sign into law so-called “right to work” legislation this week. The law allows workers at unionized companies to not pay dues to their union – thereby severely cutting the funds that give unions their strength.