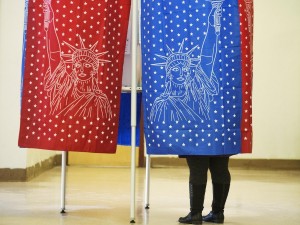 Today is Super Tuesday Part III and we will be following this important primary day. It is make or break for some candidates, and we could have some real answers on how the Republican and Democratic primaries are shaping up by the end of the night. Today could be Kasich and Rubio’s last stand and the last hope the GOP has of a candidate other than Trump. Follow us on Twitter and Facebook for updates and commentary throughout the evening.

Who will be today’s big winners? Pundits weigh in

The Hill asked a number of commentators to predict what happens in today’s Republican and Democratic primaries. Here’s what they had to say.

Sen. Marco Rubio (Fla.) will lose to Trump in Florida and as a result, Rubio will have to exit the race. Rubio had the misfortune of running against a front-runner with honest-to-goodness strong and deep ties to Florida. Many Floridians believe Florida is Trump’s legitimate second home. In Ohio, Kasich will win, but not going away. Trump will come in second, and third and fourth place will not matter since it is winner-take-all. After Tuesday, the question will be: How do Sen. Ted Cruz (Texas) and Kasich block and tackle Trump from getting the 1,237 delegates needed for the nomination? The next delegate-rich states to watch are Arizona (with 58 delegates), Utah (40), Wisconsin (42) and New York, the latter with a whopping 95. It should be noted that to date, Trump has won battleground general election states like New Hampshire, Virginia, Nevada, which are must wins for Republicans. It is not only that he is winning; it is where he is winning and with what demographics. A plurality may get you a state, but it will not necessarily get you the nomination.

Blakeman is a professor of public policy, politics and international affairs at Georgetown University and was a senior adviser to former President George W. Bush.

Trump and Cruz are going to emerge as the big winners today.

Rubio is going to get shellacked in Florida and drop out on Wednesday. He will NOT endorse The Donald – ever.

Kasich will win Ohio by 1 or 2 percentage points and will stay in the race.

Trump will win Florida big, and will average his usual 35 percent in Illinois, Missouri and North Carolina.

Cruz will place second in almost every state, and accumulate enough delegates to make the argument that only he can take on Trump and deny him the nomination. Cruz has flown under the radar lately — and that actually has calmed down his image a bit — thus making it more palatable for establishment GOP figures to hold their tongues and actually endorse Cruz in an effort to stop Trump.

The Stop Trump Movement — which will have spent over $10 million — will be deemed a complete flop.

LeBoutillier is a former Republican congressman from New York and is the co-host of “Political Insiders” on Fox News Channel.

The chaos in this year’s presidential campaign continues to gather steam after Sen. Bernie Sanders‘s (Vt.) win in Michigan and with the polls confirming that the back-and-forth will likely continue between Clinton and Sanders — but with a significantly more civil tenor than the GOP. Close races in Illinois (Clinton’s birthplace and a Democratic stronghold), Ohio and Missouri might not bode well for Clinton, as we’ve seen that Sanders has the ability to swing the close races into his column. My crystal ball shows Clinton securing 527 delegates with blowout wins in Florida and North Carolina and a single-digit win in Ohio.

Owens represented New York’s North Country from 2009 until retiring from the House in 2015. He is a partner in the Plattsburgh, N.Y., firm of Stafford, Owens, Piller, Murnane, Kelleher & Trombley, PLLC.