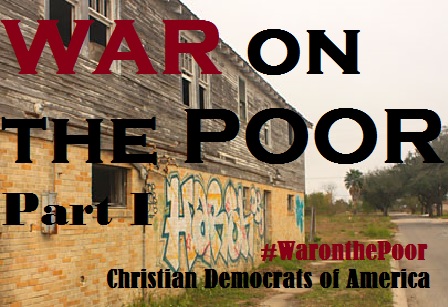 Below is one of many examples just over the past week of the disturbing trend, and apparent popularity in heavily Right-Wing districts, of an all-out War on the Poor in our country. Vowing to defund Obamacare. Refusal to accept the Medicaid mandate, leaving millions without healthcare and without options. Voting rights, threatening arrest to non-profits and churches who feed the homeless in parks….the list grows each week.

The story below of the no-mercy “plan” in South Carolina which basically criminalizes “the least of these” is just the first of our #WaronthePoor series. “This is no plan, this is just a disgusting law to sweep the needy under the rug so we don’t have to look at them, don’t have to see the plight of the poor,” says Christina Forrester, CDA Founder. “There is no plan of action, extra shelters, help with job location services, assistance with housing or getting people on their feet…just ‘get the riff-raff out of our sight.’ Lord have mercy on us.”

Proverbs 14:31 “He who oppresses the poor shows contempt for their maker, but whoever is kind to the needy honors God.”

S.C. capital’s plan for the homeless? Ban them

South Carolina’s capital city has approved a plan to rid its downtown of the homeless people officials fear might prevent Columbia from becoming a regional economic hotspot, the New York Times reports. Under a policy the National Law Center on Homelessness and Poverty calls an “extreme, highly disturbing example” of targeting the homeless, they will be offered three options: Go to the city’s riverfront shelter (which will eventually be moved further from downtown; one councilman suggested a location 15 miles away), get out of town altogether, or go to jail.

But critics — including a homeless man who spoke at the lengthy council meeting where the plan was approved — say all policies like Columbia’s do is shift the problem. Atlantic Cities sees another problem: The waterfront shelter holds just 240 beds, for an estimated homeless population of 1,500.