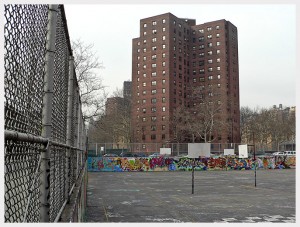 “Rich people who see a brother or sister in need, yet close their hearts against them, cannot claim that they love God.” (1 John 3:17)

The New York Primary has brought one undeniably good thing into the political discourse – a renewed focus on public housing needs. Both Democratic candidates Bernie Sanders and Hillary Clinton have visited public housing after a challenge from Lawrence O’Donnell and both have issued strong statements about their plans for affordable housing.

Hillary Clinton visited toured East-Harlem public housing and spoke at a senior center in Harlem over the weekend where she discussed prioritizing low income housing. She made this statement in an interview with the Brooklyn Eagle: “…we’ll provide more resources to public housing authorities like NYCHA, and pair these investments with broader economic development efforts.  We’ve got to help low-income residents break free from cycles of poverty, and that’ll take more than better public housing – that’ll take better job and educational opportunities too.”

Bernie Sanders toured public housing in Brooklyn Sunday and made a commitment to allocate federal funds to repair and expand housing. He said this in a speech: “We have a $17 billion backlog in construction needs. We have community centers for kids that are closing down…We are going to rebuild inner cities in this country.”

Below is an excerpt from a Salon.com article which discusses the national crisis of public housing in the United States. It is a shame that no one in either party has made this a priority issue until now, but we are just thankful that at least the Democratic candidates are talking about this issue, want to do something about it, and the people who need help are getting a spotlight.

The land of abandoned Americans

For decades now, these projects, built under the auspices of the Federal Housing Act of 1949, have been permitted by the federal, state and city governments to deteriorate to the point where people are killed by faulty elevators and thousands of children are regularly exposed to toxic mold and unsafe conditions. Consider that there is now a $17 billion dollar backlog in desperately needed capital repairs.

Over the years, as New York City’s murder rate has dropped to historic lows, one analysis shows that NYCHA residents are murdered, raped or assaulted at twice the rate, or more, of the rest of the city.

In O’Donnell’s tour of a Bronx NYCHA project, with New York City Councilman Richie Torres, viewers saw a padlocked playground, where swings and slides were bereft of children, because the project’s community center had been shuttered because it had been permitted to become a potential danger to the public.

O’Donnell brought cameras into a NYCHA apartment where a resident complained of chronic mold. In fact, back in 2013 the mold conditions were so pervasive, such a threat to public health throughout NYCHA, that the Natural Resources Defense Council brought a successful federal class action against NYCHA on behalf of long-suffering residents who were paying rent to live in toxic quarters.

I have investigated living conditions in NYCHA projects located in all five of New York City’s boroughs. In every visit the story was the same. Mold and collapsing bathroom ceilings were a chronic problem related to leaky high-rise roofs. Because NYCHA has never had the amount of money to fix the roofs that leak, it is fighting a loosing battle where they come in and do patch repairs that give way in a matter of months.

In interviewing elderly residents, I learned that “back in the day” these projects had beautiful flower beds and a sense of community, with sufficient maintenance help. In the summertime, teens that lived in the projects were paid to maintain them. These days, there’s a summer job lottery where thousands of kids are turned away.

In doing research for one of the unions that represents some of the NYCHA workers, I stumbled on the preamble to the Federal Housing Act of 1949, which was co-sponsored by New York Senator Bob Wagner, a liberal Democrat, and Ohio Senator Bob Taft, a conservative Republican.

Incredibly, the authors called for “a decent home and living environment for every American family.” The Housing Act of 1949 was the only part of President Harry Truman’s Fair Deal that made it into law. In his 1949 State of the Union Truman said “the American people have decided that poverty is just as wasteful and just as unnecessary as preventable disease.”