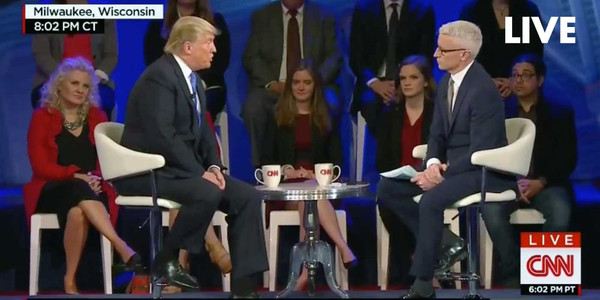 If last night’s performance by GOP Front-runners Ted Cruz and Donald Trump at the CNN Town Hall wasn’t enough (great editorial on this below), Donald Trump also just revoked his pledge to support the GOP nominee if it is not him – ensuring a Democratic victory in November. It has long been foretold that if Trump is the GOP nominee, either Democratic candidate, Hillary Clinton or Bernie Sanders, can pull off a big win in November. But if Trump feels he has been “mistreated” by the GOP estbalishment and pulls his support for the party and the non-Trump nominee, his supporters will follow, creating a mile wide rift in the Republican party and possibly splitting the vote if he runs as an Independent.

The GOP has brought this situation on itself with the continual push to the Far-Right fringes of its party. This is evident in the fact that Ted Cruz is an actual consideration as their anti-Trump nominee – a candidate who, last night at the CNN Town Hall, did not back down from his call to patrol Muslim neighborhoods. The “Constitution Candidate” seems to not understand what the Constitution, democracy and freedom actually means. The GOP has one moderate (by current standards) candidate in John Kasich who would present an actual challenge to Democrats in November, but the one reasonable candidate who does not want to ban and patrol people based on religion is obviously not extreme enough (or entertaining enough?) for current GOP tastes.

So we should probably be thanking Cruz and Trump, just this one time.

Republicans Ted Cruz and Donald Trump put on such a horrid display at the CNN Town Hall in Wisconsin that they may have just gotten a Democrat elected to be the next President Of The United States.

For anyone who thought that Sen. Cruz (R-TX) would be a better choice than Trump, the CNN town hall happened.

Cruz refused to walk back his call to police and patrol Muslim neighborhoods. Anderson Cooper asked Cruz about his call to patrol and secure Muslim neighborhoods. First, Cruz tried to change the subject and blame President Obama. Cruz repeated his attack line that Obama won’t say fundamental Islamic terrorism. Cruz said that what his plans means is that, “we target the enemy,” and accused Democrats of playing a politically correct game. Cooper pointed out that the New York Police Commissioner said that the plan Cruz is touting failed in New York and that his claim that it would be a success was complete bunk.
What was missing in Cruz’s answer was a flat out denial that he would police Muslim neighborhoods in the United States.