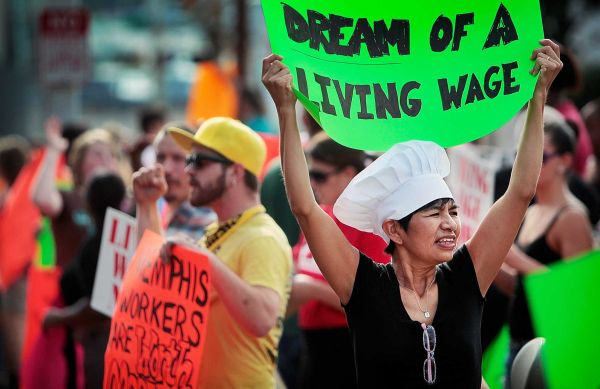 Just further proof that if we want real economic reform for the 100%, we need minimum wage to become a livable wage now! And we need investment into education and our infrastructure. This Congress won’t do it – in November let’s elect one that will!

The jobs that have been added to the economy during the recovery pay 23 percent less, on average, than those that were lost in the recession, according to a report from The U.S. Conference of Mayors (USCM).

This trend was driven by the sectors that saw the highest losses and those that have bounced back. The manufacturing and construction industries bled jobs during the recession, and each pay $63,000 and $58,000, respectively, relatively high wages. On the other hand, the biggest job gains during the recovery have come in sectors like hospitality and food services, which pays $20,955, health care, which pays $47,000, administrative support, which pays $37,000, and retail, which pays $29,322.

Something similar happened in the most recent downturn before the Great Recession, the recession between 2000 and 2003. In that time, the jobs lost paid an average of $43,950, while those added afterward paid 12 percent less. But that gap is not nearly as large as the one in today’s economy.