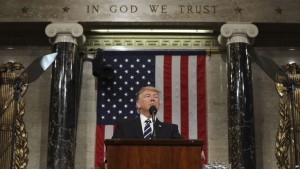 It was obvious President Trump had a different tone last night – that cannot be denied. The words were better, the presentation was better. Some of the ideas and rationale behind it were even good. Breaking the cycle of poverty? Yes, obviously, Democrats will get behind that. But I love what Rachel Maddow has been saying, and I have begun to adopt this same motto with this administration: “Watch what they do, not what they say.”

Just hours before the “new tone” and more “presidential” statements on ending poverty and gun violence in the inner cities, the President signed into law new legislation to make it easy for the seriously mentally ill to get a gun. This not only gives free reign for anyone who is paranoid or delusional to own firearms, but those who have a history of severe depression and suicide attempts. Look for gun violence and suicide rates to increase.

President Trump spoke in a more unifying tone, even referring a few times to our nation being made up of all races, backgrounds and religions. However, in the next breath he was scapegoating undocumented immigrants, describing a new agency based on victims of immigrant crimes. Focusing on one specific minority group of victims of violence by immigrants, brings out negative and destructive immigrant stereotypes and is a fear-mongering tactic. It is a well-worn historically-used scheme of dividing, creating distrust, fear and scape-goating . This paints a racial and ethnically-charged image of immigrants in this country that feeds into every radical stereotype, fear and paranoia. During the campaign, candidate-Trump would parade family members of people killed by an illegal immigrant on stage, and there is no shift here as President Trump highlighted victims (in a shameful way) in the same way last night. There is one big problem with this  – you can make the same claim of “danger” and victimization with any group. Bring up a group of people whose children were killed by white males who are U.S. Citizens and you will not be able to fit the victims in the biggest football stadium in the country.

This week, Trump has promised a new travel ban executive order. There is no change in direction, only slightly in tone. Until the heated fear-mongering regarding immigrants changes, until there is an embrace of a comprehensive immigration solution that is rooted in both safety and compassion, these are just words and this speech was only hypocrisy.

I want to end with something my mother Connie Forrester, a pastor who holds a Master’s in Social Work and has been in the field with the most vulnerable populations for over 20 years, wrote after the election. It deals not only with immigration and our shared values, but the loss of our intrinsic idealism as a country. Trump tried to tap into that idealism last night and bring it back, but without proof, it is only hypocrisy and manipulation. We must continue to pray and stay in the fight to get this back and I believe we will.

“On November 8th, 2016, something serious and potentially fatal happened to the American people. Throughout the entire campaign we all began to feel the pangs of death but we could not believe this could actually happen in the United States. We held on to our hope, yet on that day by around midnight, our collective chests began to become heavy and a sense of dread encompassed our minds. You could feel it in the air. We lost something…its absence was sharp and painful and it left us bereft. What died; what tragedy had fallen on us? Idealism. That hope and belief that we would overcome whatever fell on us and continue to present American values to the rest of the world, was gone.

Part of being an American has always included, for me, the whole-hearted belief that our country and our beliefs were grand. We are not perfect but we really wanted to be. We would swell with pride because we truly believed our ways and democracy were lofty and we would find a way to rise above every problem we encountered. In our heart of hearts we knew we would continue to work past our problems and rise above the ashes. We always had the answers or the way to find the answers to our wrong-doing, and we would find a way to change it.

I lived through the turbulent 1960’s and 1970’s when we were battling prejudice and discrimination, and we did not want to stop until it was abolished and Civil Rights victories were won. We made many mistakes through that time. But deep down I believed we would overcome and find the right path, and there were changes and progress made. I remember the ugliness and hatred of those times, however, I believed we would come through it and continue to grow.

During the entire disgusting campaign for the presidency, I refused to believe that this could happen. I could not accept that we as a nation had fallen that far from our values. It wasn’t just Hillary that lost that night, we all lost. Our idealism fell. We lost the intrinsic belief that we were great and our values were what we stood on. I grieved, my heart grieved, I felt scared. I had never been stripped of my ideals and pride. I kept thinking this can’t be, it was surreal.

We watched, waited and hoped, maybe it will work, and hopefully it won’t be that bad. Now we know that it is actually worse! I feel like I’ve been transplanted to another country and that evil walked in and took over. These past two weeks Lady Liberty was on her knees! “Don’t send us your huddled masses, go away, die in your own land.” God forgive us! I have to believe that we will overcome. If I don’t hold on to that, then what? I pray to God for help and safety.