SCOTUS Nominee: The Constitution Only Counts When It Isn’t Obama 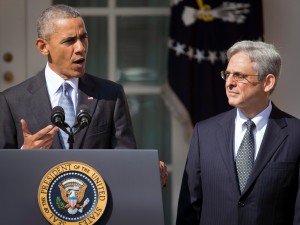 The Senate Majority Leader Mitch McConnell, of the party who claims to abide by the Constitution, has said he will block President Obama’s Supreme Court nominee, Merrick Garland…out of “principle.” The President has picked a nominee that cannot be contested on grounds of “too liberal” or character or record, so the Republicans are vowing to block him on grounds of the principle of “Obama is our president”?  Ted Cruz consistently calls himself the constitution candidate, yet he holds the same view as Mitch McConnell and says his party should not abide by the Constitution and do their job by even holding a hearing for the Supreme Court nominee. It is exactly this type of political gaming that the American people are angry about, and that has given rise to Donald Trump leading the broken Republican party “leadership.” Refusing to legitimize President Obama by giving him the respect of voting on his nominees has been one tactic for the last seven years the GOP has used. They are the party of NO. This is why we must elect not only a Democratic president, but Senate and House!

McConnell: Blocking Supreme Court Nomination ‘About A Principle, Not A Person’

A Supreme Court nomination, Obama said is “supposed to be above politics, it has to be, and should stay that way.”

McConnell’s comments came after a pledge he made last month that that the Senate would take no action on the nomination, setting the stage for a political fight. McConnell said Wednesday that the “the decision the Senate made weeks ago remains about a principle, not a person.”

“It seems clear President Obama made this nomination not, not with the intent of seeing the nominee confirmed, but in order to politicize it for purposes of the election,” McConnell said.