What’s Next For the Christian Left? 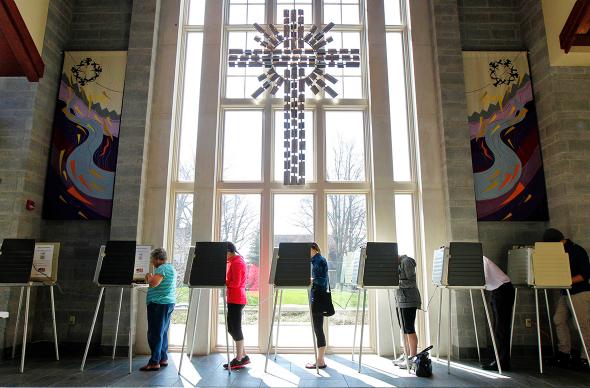 The theater of national politics hides a dangerous trend. I was once a pollster in Washington, DC, for a firm that worked for many prominent politicians at home and abroad. I learned about the value of building coalitions, seeing micro trends, and driving wedges through the opponent. I have something optimistic to tell you about the future no one else sees, but I’ll start with the past.

I spoke up at a Democratic gathering in a heavy GOP district immediately after Trump’s “surprise” win. All I said was the following: Democratic candidates need to do a better job speaking to their values. Our values are not self-evident if someone like the nihilist Trump can fill this void. Hillary is a religious person, but the voters never heard about it. Why not? It might have helped in red and purple states she narrowly lost! Suddenly, someone who had just lost a state legislative race interrupted me: “No. You are wrong. Obama won twice. What we are doing is totally working.”

Her delusion is shared nationally today. These two Obama wins were during a time when Democrats lost nearly 1,000 state-level legislative seats, making the Hindenburg look like a safe landing. Because of this, the GOP today has the ability in nearly half of states to mount a massive and unconstitutional disenfranchisement effort in plain sight. The gubernatorial loss in Virginia and the Texas Taliban’s assault on reproductive rights is just the tip of the iceberg. The Democrats are the Titanic. Biden’s narrowly close win masks a hollowing of the party at the local level.

Now, for the future. Trump can easily win again next cycle. I agree with Republican David Frum’s piece in the Atlantic that Trump doesn’t have to steal the election because of the underlying trends. This should be obvious. But why I have I been warning that something like Trumpism was already afoot since 2001? Sometimes I feel like I’m Bill Murray in Groundhog Day. After Trump’s “surprise” win, pundits clutched pearls and cried “this is not who we are.” Really? America was above electing someone like Trump? This is a nation that shredded its Constitution, engaged in torture, performed widespread wiretapping on its own citizens, engages in mass incarceration, and launched a bi-partisan war that killed 300,000 innocent civilians abroad. If Trump is the first time you were offended by the politics of the past few decades, you might not be paying attention.

Fascism didn’t start with Trump’s clumsy attempt: it began decades earlier with Christian Nationalism, the Religious Right, and the GOP’s cynical flirtation with these two forces, a flirtation that would ultimately devour any voice of conservative moderation that was once the hallmark of the party. Trump is not a bug, he’s a feature. He rode a wave that has been cresting long before 2016. It was a wave that even consumed some centrist Democrats whose best electoral strategy was to cave to some of the worst Republican ideas. Very few understand that Trumpism has deeper roots, with the exception of some like Spencer Ackerman , who has argued one must understand our post 9-11 politics to understand Trumpism. I’d only add that you also need to understand the Right’s
politicization of Christianity to see the inevitable appeal behind Trumpism. Listen to those who saw it coming, not the pundits who pretended like it was impossible or those who helped make happen. Listen to the lonely Cassandras: they offer wisdom. Months before 1-6-2021, I warned about the “immeasurable and permeant harm” Trump could do on his way out the door when a coup is attempted. An old college friend messaged me after my article and asked, “do you remember in 2001 telling me that you thought the seeds of fascism were already planted back then?” I said this because I take Christian Nationalism and the Religious Right at their word. They want nothing less than complete victory. Sinclair Lewis said it better than I can: “When fascism comes to America, it will be wrapped in the flag and carrying the cross.”

Now that many pundits are finally predicting a Trump win in 2024, I’ve since moved on to something more positive. I see a vulnerability in the GOP’s coalition, and an opportunity for the Left. An Achilles heel is seen in their numbers. I accurately predicted in early 2020 that even if only a small percentage of Trump’s Evangelical base erodes, Trump would lose. In fact, I asked the reader to imagine “if the nominee in 2020 can raise Hillary’s 16% [of white evangelicals] by just 4-5%.” If politics is the art of the possible, politics is also the practice of hammering a wedge into your opponent’s coalition while expanding your own. Twitter Democrats have forgotten that politics is about persuasion, not righteousness.

My optimism was eerily justified. A game-changing shift has happened in the last four years: while 81% of White Evangelicals voted for Trump in 2016, that number decreased to 75% in 2020 , according to exit polls. With the exception of Politico, I’m not finding any coverage of what is one of the more important stories out of the 2020 election. That some shift happened isn’t a surprise to me: organizations like Christian Democrats of America and Vote Common Good have been working incredibly hard at the grassroots to raise the voice of the “Religious Left.” The Religious Left vote was essential in the Georgia Senate races. It was likely pivotal in states flipping Michigan and Georgia towards Biden. You just haven’t heard this story because the mainstream media is stuck
with a bogus narrative that Trumpism started in November 2016 out of thin air.

Mainstream Democrats don’t “get it” because one half of the party has abandoned persuasion in favor of ideological purity, while the other half seems to not notice the emergency at the local level across the country. From NPR to CNN to MSNBC, no one is curious about the vulnerability in Trump’s white Evangelical “base.” In fact, NPR incuriously said Trump’s evangelical base was “stable” from 2016 to 2020. Exit polls dropping from 81% to 75% in four years is not huge, but it’s hardly “stable.” Whatever your opinion of exit polls, this micro trend hints at the soft underbelly of the beast. And best of all, we can exploit that vulnerability from the ground up. Religion is one of few civic society institutions that is somewhat isolated from state and corporate control, especially in a time where voters are being sucked into social media bubbles. Religion can play a vital and positive role in democracies when we appeal to religion’s better angels. Do you have a better idea? Should we just wait till Fox News one day lives up to its “fair and balanced” slogan?

Many secular liberals think I’m tilting at windmills. In fact, I have even spoken with a few candidates who told me the religious right is waning in power because of demographic trends. Yet, it is they who are naïve and flying blind. I see another story in the numbers that the GOP strategists also see right now but national media outlets ignore. In the same period his white Christian support dropped slightly, Trump’s support amongst Latinos and African Americans increased by a drastic amount ( e.g. Trump gained 6% of black men and 5% of Hispanic women!). While national Democrats take their past coalition for granted, someone is driving a wedge through it. These very real trends are being ignored because they conflict with the “Resistance Media’s” narratives. Many on the coasts think that Christians are rigidly racist red state rubes. Incorrect: the Left has simply failed to provide a counter narrative to “values voters” within voters’ framing. Many Democrats think they can sit back on autopilot and let the gentle winds of minority demographics fill their sails. Both are dangerous lullabies that will end in a nightmare for our democracy. If politics is the art of the possible, the practice of politics is the messy work of building unlikely coalitions and driving wedges.

You drive wedges by innovative framing that works outside of the current rigid partisan binary. That means talking to people outside the current ideological bubble. The ever growing “Christian Left” can help Democrats win in red and swing districts. If you care about the control of the Senate, than get curious about building coalitions in red states. GK Chesterton said “the essence of the picture is the frame.” Giving voice to the “Religious Left” offers a useful frame in key red and purple districts. All we need is a small percentage of them to dominate any election. The Christian Left can speak a different empathy-centered politics, one based on love, empathy, and cosmopolitan inclusion. It’s turn-key. It’s right there. It’s in the words preached by a Jewish rabbi whom the majority of Americans profess to follow. This is the Sermon on the Mount. This is the parable of the Good Samaritan. This is values-based and morality-based language that re-humanizes the de-humanized. This is the same political empathy advocated by many secular philosophers, but framed in a more relatable way: you meet voters where they are, now where you think they ought to be.

Democrats need to embrace a bold politics of persuasion. A politics that abandons the project of persuasion is a vessel without a sail, floating aimlessly in the sea of social media rectitude. Politics is not about being right: it’s about building coalitions on the ground so that those who are wrong don’t end up in power. While Democrats’ most active supporters focus on achieving the self comforting utopia of thought-purity to distract themselves from the Hindenburg disaster at the local level, it’s time to drive wedges at the candidate level by calling out “Christian” politicians in red and purple states when they espouse explicitly un-Christ-like policies. (As someone who has been testing out this framing in red states for years, I assure you it can cleave off a sufficient percentage of persuadable voters). If a progressive candidate is a person of faith, they must clearly articulate why the Religious Right and Christian Nationalism are not the only game in town any more. They must articulate why they should occupy the high ground. Let’s get a “Christian” hypocrite on the defensive for once!

What do we have to gain in the voter’s eye? Authenticity.

What’s do we have to lose? Democracy.

Bjorn Philip Beer is former pollster, a writer, and frequent contributor to CDA where he serves on the Board of Advisors. His work has ranged from Red Letter Christians, to NPR’s Living on Earth, to Earth Island Journal. Follow him on Twitter at @BjornPhilipBeer.