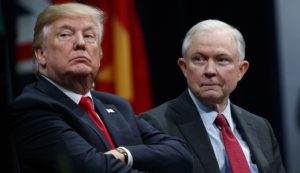 Gal 6:7 “Do not be deceived: God cannot be mocked. A man reaps what he sows.”

Matt 7:15-16 “Beware of false prophets, who come to you in sheep’s clothing, but inwardly they are ravenous wolves. You will know them by their fruits…”

Jeff Sessions’ Justice Department just announced the formation of a Religious Liberty Task Force aimed at ensuring religious groups’ protections when their beliefs conflict with government regulations. The DOJ is using language that seems to imply a directive to protect only the rights of one specific type of Christian.

In October, Attorney General Jeff Sessions issued a directive outlining a broad interpretation of religious freedom protections. It provided support for employers making hiring decisions based on their faith or objecting to providing health insurance for birth control.

The task force will follow up on that directive, Mr. Sessions said Monday. It will facilitate Justice Department compliance with the memo; facilitate coordination with it across government agencies; and reach out to religious organizations for feedback and develop new policies and strategies to protect religious freedoms.

“A dangerous movement, undetected by many, but real, is not challenging and eroding a great tradition of religious freedom,” Mr. Sessions said announcing the task force. “There can be no doubt it’s no little matter. It must be confronted intellectually and politically and defeated.”

Protecting LGBTQ rights and “Religious Freedom” is not mutually exclusive. We would like to know if the Religious Liberty Task Force will protect the rights of Gay Christians too, and have put this question forth to the Justice Department. We would also like to know if this “task force” will protect the rights of all religions, including rights of Muslims and Jews to live free of discrimination. This Thursday we will feature a special segment on our podcast about the Religious Liberty Task Force and will discuss it with special guest, Pastor John Pavlovitz.

If you want to take action, we have a #ChristiansResist task force to protect America from the Religious Liberty Task Force. Join the force at  https://christiandemocratsofamerica.org/movement.