Trump’s Economic Plan: A YUGE Favor to the Rich 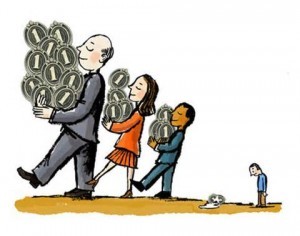 Trump unveiled his plans for the economy in a big speech on Monday that was meant to reset his campaign and finally give details to his economic policy. Below is a fact-check article from NPR that is very informative on looking at the realities of Trump’s plan. However, the biggest take-away from the Donald Trump economic plan is that it is loaded with big favors for the wealthy, corporations and big business insiders without improvements for the millions of Americans living in poverty. It will do nothing to lessen the income inequality gap. Hillary Clinton said it best, “…They tried to make his old tired ideas sound new. But here’s what we all know, because we heard it again. His tax plans will give super big tax breaks to large corporations and the really wealthy, just like him and the guys who wrote the speech, right? He wants to basically just repackage trickle-down economics.”

So once again, when it comes to economic policy that will not help the poor but just give bigger breaks to the already-very-wealthy, the GOP under Trump is ready to give the handouts to the billionaires. There is no question who Christians who care about our Christ-given mandate to care for the poor and the thousands of scriptures referencing prioritization for the poor, should support. Join the Christians for Hillary movement on Facebook and Twitter!

Proverbs 22:16 “He who oppresses the poor to increase his wealth and he who gives gifts to the rich—both come to poverty.

Donald Trump is coming off a week of disastrous headlines and cratering poll numbers. His major economic speech on Monday at the Detroit Economic Club, a vision described by his campaign as “Winning the Global Competition,” was a chance to turn the page.

During an address of just over an hour — which was interrupted multiple times by protesters — the GOP presidential nominee unveiled a new iteration of his proposal to reshape America’s tax system. It has just three tax brackets (one fewer than the tax plan he released in September, which was removed from his website in the past 24 hours), would limit taxes on all forms of business income to 15 percent, would end the estate tax and would “exclude childcare expenses from taxation.”

Other highlights include a proposed moratorium on all new federal regulations and would “remove bureaucrats who only know how to kill jobs [and] replace them with experts who know how to create jobs,” according to a preview released by his campaign. It’s unclear exactly what that means or how it would work, but there are currently about 2.7 million civilian federal employees.