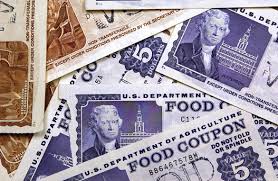 The Christian moderates and progressives can no longer sit by and allow the poor and working poor to be stigmatized and insulted – GOP: Enough is enough! People don’t make enough to sustain their families because wages are so low, and many cannot find work or enough work – yet the GOP is also against raising wages. Prov 17:5 “He who mocks the poor shows contempt for their maker; whoever gloats over disaster will not go unpunished.”

WASHINGTON — Rep. Markwayne Mullin (R-Okla.) told a horror story to his constituents during a town hall in Welch, Okla., on Thursday.

In a video of the event posted by ThinkProgress, the freshman Republican said he was in Crystal City, Va., buying groceries in a nice but crowded store when he noticed something strange.

“Every lane was open and it was backed up and I noticed everybody was giving that card,” Mullin said, apparently referring to the electronic benefit transfer cards most states use to distribute food stamps. “They had these huge baskets, and I realized it was the first of the month.”

In Virginia, food stamp benefits are automatically deposited on the first of the month for anyone whose case number ends in zero, one, two or three.

“But then I’m looking over, and there’s a couple beside me,” Mullin continued. “This guy was built like a brick house. I mean he had muscles all over him. He was in a little tank top and pair of shorts and really nice Nike shoes. And she was standing there, and she was all in shape and she looked like she had just come from a fitness program. She was in the spandex, and you know, they were both physically fit. And they go up in front of me and they pay with that card.”

Mullin knew what he’d witnessed. “Fraud,” he said. “Absolute 100 percent, all of it is fraud. There’s fraud all through that.”

Nearly 47 million Americans currently receive benefits from the Supplemental Nutrition Assistance Program, most of them either elderly, disabled or children. Republicans in the House of Representatives are currently trying to cut spending on SNAP by about 5 percent, or $4 billion per year.

Stories of cash register resentment have long informed Republican efforts to curtail the program, enrollment in which has doubled since the onset of the Great Recession. But in most stories it’s more common for the characters allegedly misusing the program to be fat, not fit.