Do you believe Governor Bentley is a moderate and can be trusted with not giving in to the radical-Right of immigration reform? How much more would get done in the United States if we had more moderate Republicans to work hand-in-hand with Democrats to form reasonable legislation! Something to pray for. 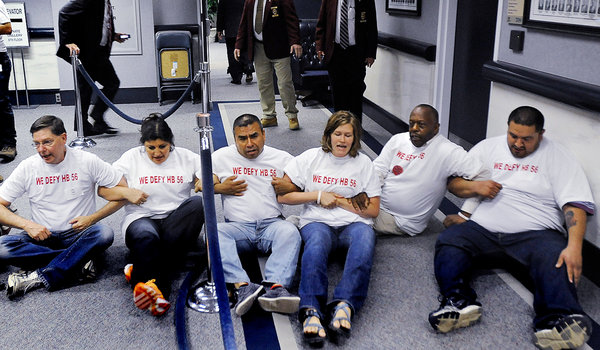 Mickey Welsh/Montgomery Advertiser, via Associated Press Protesters in the Alabama Statehouse in Montgomery on Wednesday, when lawmakers supported an immigration law.

MONTGOMERY, Ala. — Gov. Robert Bentley of Alabama called a special legislative session on Thursday and urged lawmakers to consider changes to the state’s far-reaching immigration enforcement law, less than a day after legislators voted to keep most of that law intact.

An earlier version of the bill had dropped some of the more controversial provisions of the law, considered the strictest and most sweeping in the country.

But the bill that passed preserved most of the original law and also added new sections, including one requiring the state to publish information, including the person’s name, about every case in which an illegal immigrant appeared in court for any violation of state law.

Mr. Bentley, a Republican, did not sign it, however, and instead called the special session. But judging from the bills filed on Thursday, the first day of the session, agreement may still be hard-fought.