If you needed another reason why to re-elect President Obama and vote in a Democratic majority to the House and Senate, this is it! It is incredible that GOP candidates, including Mitt Romney, believe that the promise of sentencing thousands of the nation’s poorest children and families to hopelessness and in some cases even death, is something to brag about. We cannot allow millions of Americans to go without the basic human right of health care and this GOP promise is good enough reason to get on board with the cause and help CDA spread the word! 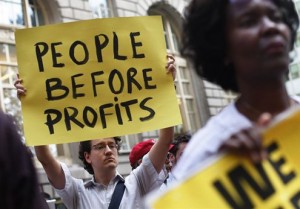 Medicaid could be scaled back sharply under GOP plans

Conservatives aim to cut federal funding for the state-run health programs for the poor if they control the White House and Congress.

Nearly half a century after President Lyndon Johnson signed Medicaid into law, conservative critics of the massive government health insurance program for the poor are readying a new push to dramatically scale it back if Republicans control the White House and Congress next year.

GOP governors, emboldened by the Supreme Court decision on President Obama‘s healthcare law, are already balking at expanding Medicaid to meet the goals of the Affordable Care Act. Some are rolling back coverage now, arguing that the program is ineffective and unaffordable.

At the same time, congressional Republicans, backed by influential conservative activists, are renewing calls to convert Medicaid into a series of smaller grants to states, reprising the successful GOP strategy that cut cash welfare programs in the mid-1990s.

Former Massachusetts Gov. Mitt Romney, the presumptive GOP presidential nominee, has thrown his support behind a block grant plan that would cap federal spending, effectively slashing Medicaid funding by more than $1.5 trillion over the next decade in what would be the most sweeping change in the program’s history.