Are Cruz and Huckabee Validating Religion as a Discrimination Tool? 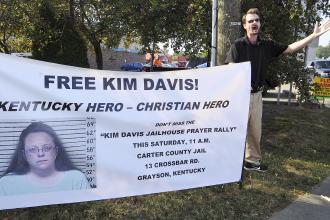 If you work with the public, you must be prepared to do a job that serves all people equally without discrimination. Besides the story we’re already familiar with by now of Kim Davis and other Kentucky clerks refusing marriage licenses to gay couples, in the last week we’ve also seen a Muslim flight attendant suspended for refusing to serve alcohol based on religious grounds. I’m just waiting for a theater employee to refuse selling tickets to a Rated R movie for the same reason! We wouldn’t be talking about Kim Davis still if so many, even in the Republican  party, weren’t validating her actions. The fact is, only going after gay couples in refusing to hand out marriage licenses is an obvious stand of bigotry and prejudice. If you are truly opposed to unions that you believe are not ordained by God, you should be stopping any marriage which you believe to be “wrong.”

My question is why aren’t Ms. Davis and the other clerks refusing to hand out marriage licenses to those who have been divorced? To couples who are atheist, or another religion? If we’re going to have a spiritual litmus test for who is allowed to be married, then whose denomination will we go by? Are Mormons allowed? Catholics? Pentecostals? Or it may simply be that you believe the couple is “unequally yoked” or it isn’t “God’s will” that they be married…are those also grounds?

I remember as a kid hearing how my aunt, a long-time praise and worship leader who had been divorced, was given the cold shoulder in churches and in some cases not even allowed to sing in the 60’s and 70’s. When word got out that she had been divorced, there were many churches that chose to shun her and the entire revival she traveled with in my family when they rolled into town. Fast forward to 2015, and I am pretty sure she could travel and sing at most churches across the country without the divorce ever getting a mention. No “more righteous” Christian has stood up before now to not allow Ms. Davis a marriage license after her numerous divorces. The self-righteousness seen within the church world decades ago regarding divorce is seen now much the same in gay marriage.

If this were just one clerk getting her 5-minutes of fame it would be easy to dismiss and walk on at this point. However, the fact that two contenders for President of the United States in the Republican party are showing support and actually planning a visit with Ms. Davis, validates her actions in a way that should be frightening to anyone who values true freedom. If Presidential candidates in one of the two major parties in a country actually support and validate individuals getting to use their own religious litmus test for who can and can’t be married in this country, it’s a big problem.

In America we are blessed to have complete freedom in how we believe, the church we go to, the worship we partake in. No one is telling Ms. Davis or any one that they must agree or disagree on the question of homosexuality – the personal spiritual convictions on this and a host of other issues (Rated R movies, alcohol, anyone?) vary widely, and advocating for equal marriage rights does not take away or have anything to do with personal doctrine. However, it is a slippery slope to take a personal belief about what is and isn’t “sin” and try to force your belief through means of the law. This is why we have laws; have a government to maintain equality and thus maintain true freedom of religion.

Paul, in talking about the Jewish law, had this to say about the burden of doctrine and religious law being placed on those who never asked for it. And remember, he was speaking to believers and how we are to act amongst ourselves, not the world outside of fellow believers, which our personal spiritual convictions have no jurisdiction over:

Galatians 5: 6 For in Christ Jesus neither circumcision nor uncircumcision has any value. The only thing that counts is faith expressing itself through love.

7 You were running a good race. Who cut in on you to keep you from obeying the truth? 8 That kind of persuasion does not come from the one who calls you.9 “A little yeast works through the whole batch of dough.” 10 I am confident in the Lord that you will take no other view. The one who is throwing you into confusion, whoever that may be, will have to pay the penalty. 11 Brothers and sisters, if I am still preaching circumcision, why am I still being persecuted? In that case the offense of the cross has been abolished. 12 As for those agitators,I wish they would go the whole way and emasculate themselves!

13 You, my brothers and sisters, were called to be free. But do not use your freedom to indulge the flesh[a]; rather, serve one another humbly in love. 14 For the entire law is fulfilled in keeping this one command: “Love your neighbor as yourself.”[b] 15 If you bite and devour each other, watch out or you will be destroyed by each other.

Washington (CNN)Republican presidential hopefuls Mike Huckabee and Texas Sen. Ted Cruz are both set to meet Tuesday with Kentucky clerk Kim Davis, hours after she was ordered to be released from the jail where she’s been kept over her refusal to issue same-sex marriage licenses.

Cruz will meet with Davis first, and Huckabee will follow up his visit with a rally protesting her confinement.

Their visit has drawn criticism from some of their rivals for the Republican presidential nomination.

“Frankly, I don’t think you should grandstand on this stuff,” New Jersey Gov. Chris Christie said on “Fox and Friends” Tuesday morning, referring to 2016 candidates planning to visit Davis.

“Look, everybody is entitled to their opinions, and I love Mike Huckabee and what he stands for. But I just think there’s bigger fish to fry here in terms of people understanding what faith in God really means,” Ohio Gov. John Kasich told reporters in Maine on Tuesday. “I don’t agree with Court’s decision but I had said I was going to accept the court’s decision.”

Christina Forrester is the Founder and Director of Christian Democrats of America. Twitter: @Christinaof9