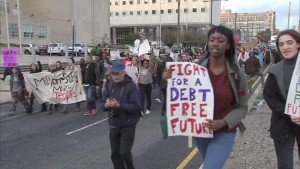 The Million Student March has swept the country starting yesterday in walk outs and protests across the country, and by now you’ve probably heard a lot of false information. The article below lays out what exactly the Million Student March is all about and what they are asking for. These students who are standing up for a cause they believe in have received a terrible onslaught of attacks on social media, as we also have for tweeting about it yesterday, as have anyone standing up with them. We have all been called moochers, lazy, “wanting free stuff from Democrats.” No. These students are asking for a livable wage and to not have to go into crippling debt to get an education. Whether all of their demands are in fact possible is a question for discussion, but in fact the idea of student debt forgiveness is a very Biblical one! The only difference is that God took it even further with calling for a total debt forgiveness on EVERYTHING in the Year of Jubilee (Leviticus 25). So is the idea of student debt forgiveness still so radical that right-wing supporters feel it necessary to berate these young people with insults?…or are the Republican candidates only for Biblical policy when it suits them?

“Education should be free. The United States is the richest country in the world, yet students have to take on crippling debt in order to get a college education,” the organizers of Thursday’s event, dubbed the Million Student March, explain on their website. “We are united to fight for education as a human right.”

The day of student activism comes just a few days after fast food workers in hundreds of citiesheld their biggest strike yet as they fight for higher wages and the right to form a union. The biggest marches are expected to be held in Santa Barbara, California, New York City, Philadelphia, Portland, and Seattle, according to Keely Mullen, one of the lead organizers of the event.

What is the march asking for?

All of the participants in the Million Student March are focused on three primary economic goals to improve the situation for students: the right to a free education, the elimination of all current student debt, and better paying jobs on campus. Individual marches may also touch on issues that affect university staff, such as better pay for adjunct professors.

“There is a serious concentration of wealth right now in college campuses and administrators are making exponentially more than the average worker on campus,” Mullen said in an interview with ThinkProgress.

As the movement grows, Mullen hopes the call for free college will eventually come to include things like fees, textbooks, and housing. “Obviously that is going to be a huge battle, and will happen incrementally, but I see that as instrumental in providing free education,” she said.