The Works of the Flesh and the Debt Ceiling Deal 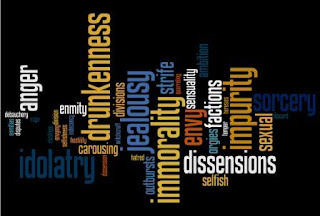 So true! This blog expresses the clear relationship Christians should observe between Godly principles, scripture and some of our Congressional leadership. We need to pray.

by Margaret Benefiel of Sojourners:

In Galatians 5:19-20, Paul lists the “works of the flesh,” contrasting them to the “fruit of the Spirit” immediately thereafter (Gal. 5:22-23). Among the works of the flesh are hostility, quarreling, jealousy, outbursts of anger, selfish ambition, dissension, and division. Another translation puts it, “People become enemies and they fight; they become jealous, angry, and ambitious. They separate into parties and groups … I warn you now as I have before: those who do these things will not possess the kingdom of God.”

Apart from the appalling outcome of the debt ceiling deal, the adolescent behavior that was rewarded in the final agreement bodes ill for our future. When children misbehave, parents and teachers need to set limits, not “compromise” with unreasonable demands. Tantrums that result in parents caving get repeated.

In contrast to the works of the flesh, Paul lists the fruit of the Spirit as love, joy, peace, patience, kindness, goodness, faithfulness, humility, and self-control. To think of Congress exhibiting these traits is laughable to us. We have become cynical, and rightly so.

Yet there was a time, not too long ago, when many legislators worked together for the common good across party lines, when such fruits of the Spirit as patience, humility, and self-control could be found in Congress, when legislators asked themselves, “Who will I become if I act in this way? What will our nation become?” When leaders attend to their behavior, the people have role models to follow.

When leaders behave badly, what message are they giving to the nation? Moreover, when that bad behavior is not only tolerated but rewarded, what message goes forth?

We have just watched the soul of our nation become a little more corrupted. Who are the prophets who can lead us out of this morass?