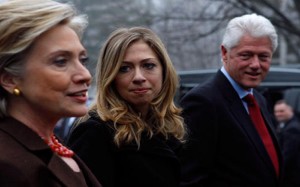 Editor’s Note: May this final blog before all the ballots are cast assist any of you who need a fresh Christian perspective on Hillary Clinton make your decision today. Happy Election Day – GO VOTE!

I remember hearing my first Clinton conspiracy story when I was just a kid and not surprisingly, it was in my own family church. A boy who I considered my best friend asked me who my family was voting for. My family made sure I had an early understanding of government and politics, so when he asked this I proudly told him Bill Clinton, and I could back that up with all my seven-year-old talking points. He gasped and I’ll never forget the shock on his face, “I can’t believe your family would vote for him, they are pastors! Don’t you know that Bill Clinton will not let any kids be home-schooled ever again?! He is against Christians and going to take away all our rights!” But I knew even at that young age that what I was hearing sounded like a story, even if I did not quite understand the term “conspiracy theory” yet. I later went to my mom and asked her about what he said, since the thought bothered me and the accusation angered me (I just assumed before then that all people in our church probably loved the Clintons too… I was in for a lot of surprises later in life!). She confirmed my suspicions and explained to me that there is a lot of untruth that goes around when we are choosing a president, and a lot of people don’t like the Clintons because they’re on the side of the poor, and people who need help and there are a lot of wealthy and powerful people who don’t like that…so they spread lies.

Thank you for the lesson Mom… because it is still so true today. And since I was that little kid defending Bill Clinton to my church friends, the Clintons have continued to be a target of conspiracy theories and attacks on all sides. Hillary has had more thrown against her to stop her as a presidential candidate than anyone possibly in our history. And that could be because of the real Clinton conspiracy.

I recently took a class at Arizona State University on Paranoia and Culture. Even though I’ve dealt with conspiracy theories throughout most of my life, it was eye-opening to see how conspiracy and propaganda tools have been used politically throughout history, and usually not for any good reason. Lately the rampant conspiracy theories about Hillary Clinton and the Clinton campaign have reached a near manic frenzy. Apparently, in case you didn’t know (because I certainly did not, but I was schooled this week), Hillary Clinton supposedly takes part in Satanic rituals, participates in “Spirit Cooking” dinners with John Podesta, is part of a child-trafficking scheme, is herself a pedophile, drinks pigs blood, works directly with ISIS to kill off Christians, regularly murders people personally, plans to usher in a New World Order and miraculously manages to do all this while managing her various diseases! But you don’t have to be on the “Alt-Right” fringe to believe the more mild – in comparison – conspiracy theories, such as the “cover-ups and corruption” charges Donald Trump brings up daily.

So today I am writing this to put out one last Clinton conspiracy theory before Election Day. My hope is that this conspiracy theory will be as wide-spread, promoted, with memes and trolls and media coverage as all the rest of them. Because this conspiracy theory has a lot more facts to back it up than any of the others I have seen the majority of my life…by a landslide. So here it is: Hillary Clinton has a passionate desire to lift-up the people of this country and the world who Jesus Christ referred to as the “least of these” and she is plotting this because she is a deeply spiritual, Christian woman, and changing lives for the better is what motivates her. Now just take a look at the evidence…

Now this is a just a very small sampling of the evidence I found. There are thousands of documents, articles, interviews, videos and historical facts that back up my theory. Just do a little research and use the hashtag #FinalClintonConspiracy and I look forward to seeing what you find! And I also look forward to waking up Wednesday morning with a renewed hope, knowing that our first woman President of the United States shares my concern as a Christian, to love your neighbor, and that whatever we do or do NOT do unto the least of these we do or do not do unto Him. And I’ll close my argument the same way I did when I was in second grade, talking to my friend in church: “The Clintons are Christians too and they want to help the poor and fight for what the Bible tells me I ought to care about most: loving my neighbor.” This simple argument is still the same.

Christina Forrester (@Christinaof9) is the  Founder and Director of Christian Democrats of America and the #Christians4Hillary movement,  a singer, songwriter and musician with a focus on social justice, Huffington Post contributor  and digital marketing consultant.