One in eight of world population going hungry: U.N.

The numbers are better, but, as the article says, this is still unacceptable. We have much work to do and pray! 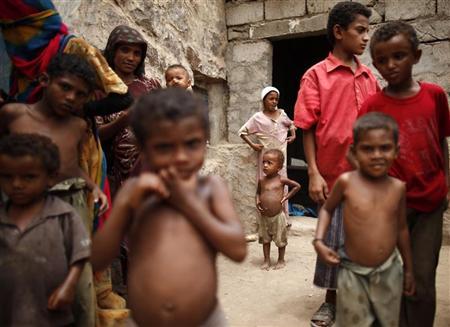 Children gather in a poor neighbourhood in the Mawzaa village of the southern Yemeni province of Taiz July 1, 2012.
Credit: Reuters/Khaled Abdullah

(Reuters) – One out of every eight people in the world is chronically undernourished, the United Nations’ food agencies said on Tuesday, and aid groups warned that rising food prices could reverse gains in the fight against hunger.

The new figures, based on a revised calculation method and more up-to-date data, are lower than the last estimates for recent years that pegged the number of hungry people at 925 million in 2010 and 1.02 billion in 2009.

“That is better news than we have had in the past, but it still means that one person in every eight goes hungry. That is unacceptable, especially when we live in a world of plenty,” said Jose Graziano da Silva, director general of the Food and Agriculture Organisation (FAO).