What are your thoughts on the Murdoch scandal? We are praying that all the truth may come out and be known… 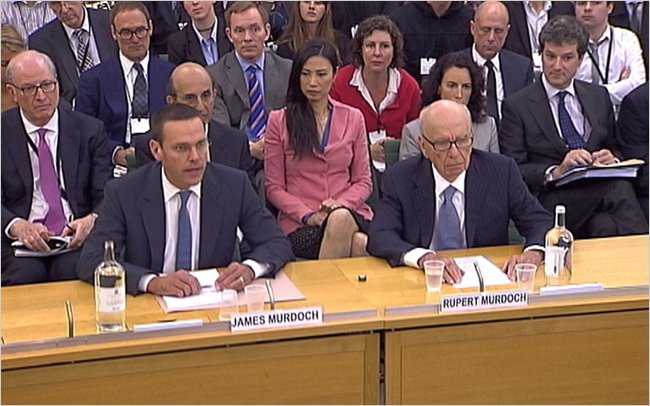 LONDON — In a grueling afternoon of testimony before lawmakers,Rupert Murdoch and some of the most senior figures in his family’s media empire apologized profusely on Tuesday for the phone hacking scandal that has convulsed British public life, even as they insisted they had not ordered or tried to cover up illegal newsgathering practices at their newspapers and were not directly to blame.

It was not clear whether their responses would satisfy skeptical lawmakers, who tried for nearly three hours to discover the extent of the Murdochs’ knowledge of events at the heart of the scandal. It exploded two weeks ago with the news that people working for The News of the World, a tabloid run by the Murdoch empire’s British arm, News International, had broken into the voice mail of a 13-year-old girl, Milly Dowler, who had been abducted in 2002 and was later found murdered. The firestorm that followed brought Mr. Murdoch down from the heights of influence here to what he called “the most humble day of my life.”

Adding to the drama, a protester disrupted the hearing by attempting to hit Rupert Murdoch with a paper plate full of whitish foam. Mr. Murdoch appeared unhurt, and the hearing resumed after a 15-minute break.

The disruption happened near the end of nearly three hours of sustained questioning by lawmakers over the phone hacking scandal, which has raised questions about the behavior of the British police, politicians and the media elite in the worst crisis to confront Prime Minister David Cameron.

Mr. Murdoch, who is 80, appeared at the hearing with his son James, 38, sitting side by side facing their questioners without lawyers at their elbow. Each wore a dark suit, white shirt and tie, though Rupert Murdoch removed his jacket after the foam incident and finished his testimony in shirtsleeves.

After the Murdochs, the committee heard testimony fromRebekah Brooks, who resigned as head of News International last Friday and was arrested and questioned by police on Sunday.

Ms. Brooks, a former editor of the News of the World, insisted that the Murdoch company acted “quickly and decisively” against phone hacking once it saw new evidence of the extent of the practice in December 2010. She told the committee that while she was editor she employed private investigators, but only for legitimate inquiries, not for hacking or other illicit methods, and she denied paying police officers for information.

At a hearing of the same committee in 2003, Ms. Brooks said her newspaper had paid the police for information — a comment she later retracted.

In a separate development, the BBC reported the existence of previously undisclosed indirect links between figures under investigation in the scandal and Prime Minister Cameron, who has been criticized by the opposition for hiring another former editor of The News of the World, Andy Coulson, as his head of communications.

In a new disclosure that threatened to bring the scandal closer to Mr. Cameron, the BBC said that in the run-up to last year’s elections, Mr. Coulson sought advice from another former News of the World executive, Neil Wallis, who has since been arrested in connection with the phone hacking investigation. Mr. Wallis worked for Scotland Yard after he left The News of the World.

The Murdochs spent much of their time before the committee, both before and after the disruption, insisting that while they were deeply sorry over the revelations of widespread unethical practices at their British newspapers, they knew little or nothing about them and had not tried to cover them up. Rupert Murdoch, the chairman and chief executive of News Corporation, the parent company of the empire, hit those themes again in a prepared statement, originally intended to open the hearing, that the committee allowed him to read aloud at the conclusion of his appearance.

The disruption came after the Murdochs had been in the hearing room more than two hours. A young man in a checked shirt rushed up to Rupert Murdoch, holding a paper plate full of foam. Wendi Deng, 42, Mr. Murdoch’s wife, lunged toward the attacker from her seat behind her husband and appeared to strike the man’s forehead with the palm of her right hand, partly thwarting the attack, though some foam did hit Mr. Murdoch. Within moments, the man was removed from the committee room by police officers who arrested him, his face covered in foam. His identity and motive were not immediately known.

“Why didn’t you see what was happening?” James Murdoch was heard asking the police, British news reports said.

Shortly after the session resumed, Rupert Murdoch was asked by Louise Mensch, a Conservative lawmaker, if he had ever considered resigning.

Why not? “Because I feel that people that I trusted let me down, I think that they behaved disgracefully,” he said. “Frankly, I am the best person to clean this up.”

The hearing offered the remarkable spectacle of one of the world’s most powerful media magnates under the harsh spotlight of public scrutiny, sometimes seeming unfamiliar with the matters raised by the panel and frequently denying knowledge of them, while at the same time insisting that no one at their company had been “willfully blind.”

Read the rest of the story at NYTimes.com – click here!